Just imagine the heat of the sand beneath you and the warmth of the sun above. Behind you, a strange little town full of weird people and their odd, disturbing shops. Ahead, an endless stretch of ocean and everything that lies beneath it. It’s the beach, and it’s where everyone likes to flock for fun.

The ultimate beach zombie flick. A Caribbean island has a voodoo curse that causes the dead to rise as flesh-eating zombies.
Really who wouldn't like a movie that gives us a zombie vs shark fight. 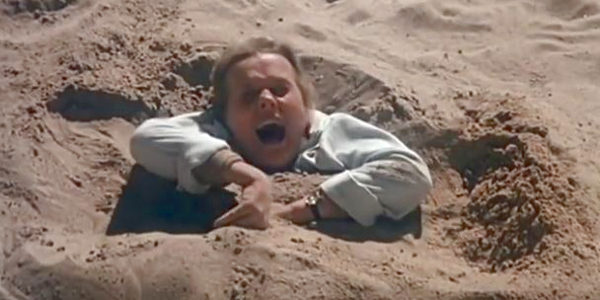 “Just when you thought it was safe to go back in the water… you can’t get to it!” Blood Beach is the rarer B-movie fun that feels almost like a precursor to Tremors, but with a beach twist.

Just because I said Tremors, doesn’t mean it is as good as Tremors.

This Italian horror film is one of the original “Video Nasties. A group of friends and a hitchhiker become stranded on a tourist island where they are stalked by a disfigured cannibalistic killer who is prowling the island after killing its residents.

The Emerson family moves in with Grandpa after mom Lucy’s divorce, older brother Michael falls in with a gang of blood-sucking teens that prefer to party all night and sleep all day.

A group of friends heading to a family-owned beachfront condo. A rare slasher where the kills are gruesome and make great use of beach-themed weapons.
Yes I know it was made in 1974, but it was banned in most countries till the 1980s.

A giant thirty-five-foot shark becomes trapped in a SeaWorld theme park and it's up to the sons of police chief Brody to rescue everyone.

As bad as it sounds especially the 3D, but it is full of future stars.