With the intended re-relaunch of the Universal Monster universe, let's look at other shared universes. The shared universe is the hottest concept in Hollywood right now, but for years crossover films existed almost primarily in the world of horror. Marvel proved that a series in which a group of characters co-existed with each other in the same world, traversing paths in huge blockbusters, could make a huge financial risk pay off. However, it was the earlier crossover horror movies that truly paved the creative way for these types of productions.

From the Universal Monsters to the ghosts in The Conjuring series, horror is no stranger to shared universes and battle royales between iconic characters. Not all of these ventures were successful, but even the economic failures provided enough entertaining material to address the hypothetical fight scenarios of many a horror fan. In many cases, these films also definitively retconned their respective franchises' canons to generate the potential for more cross-universe interactions.

So let's look at six horror universes, explaining how the properties came together and what eventually happened to them. Some enjoyed immense success and prosperity, while others dwindled into obscurity. However, they are all examples of the potential for horror to spawn sheer audacious wish fulfillment. 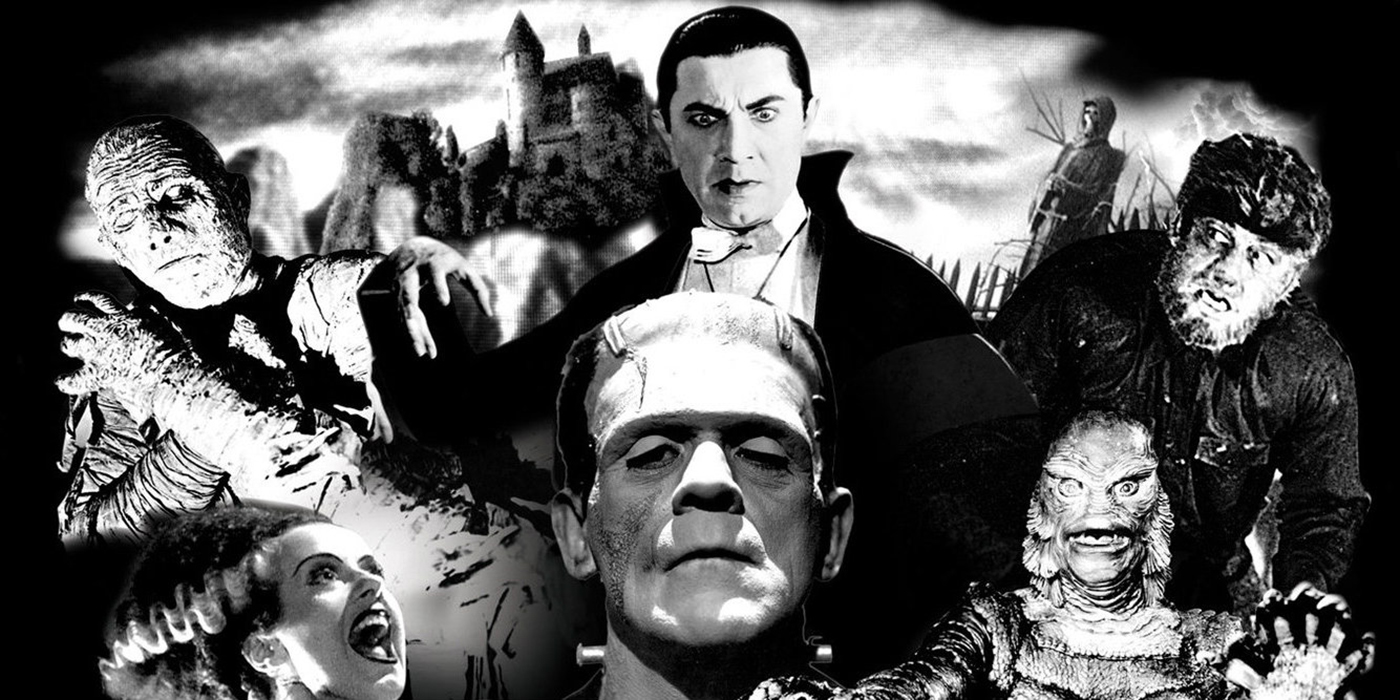 The Universal Monsters created a landmark franchise not only for horror but for all of cinema, for these creepy characters laid the groundwork for blockbuster crossover films decades before they conveyed the concept to the modern era. Universal was already enjoying the success of their monster movies throughout the 1930s and the early 1940s when, in 1943, the studio brought two of their icons together for an all-out brawl in Frankenstein Meets the Wolf Man. Dracula joined the crew in The House of Frankenstein in 1944 and House of Dracula in 1945, though both of these classic films disappointingly lacked all three monsters sharing screen time.

Ironically, it was the hilarious parody Abbott and Costello Meet Frankenstein that featured the big three interacting with each other and thus provided the most definitive crossover. This marked the end of Universal's initial venture into a shared universe, but the legacy of the monsters would live on. 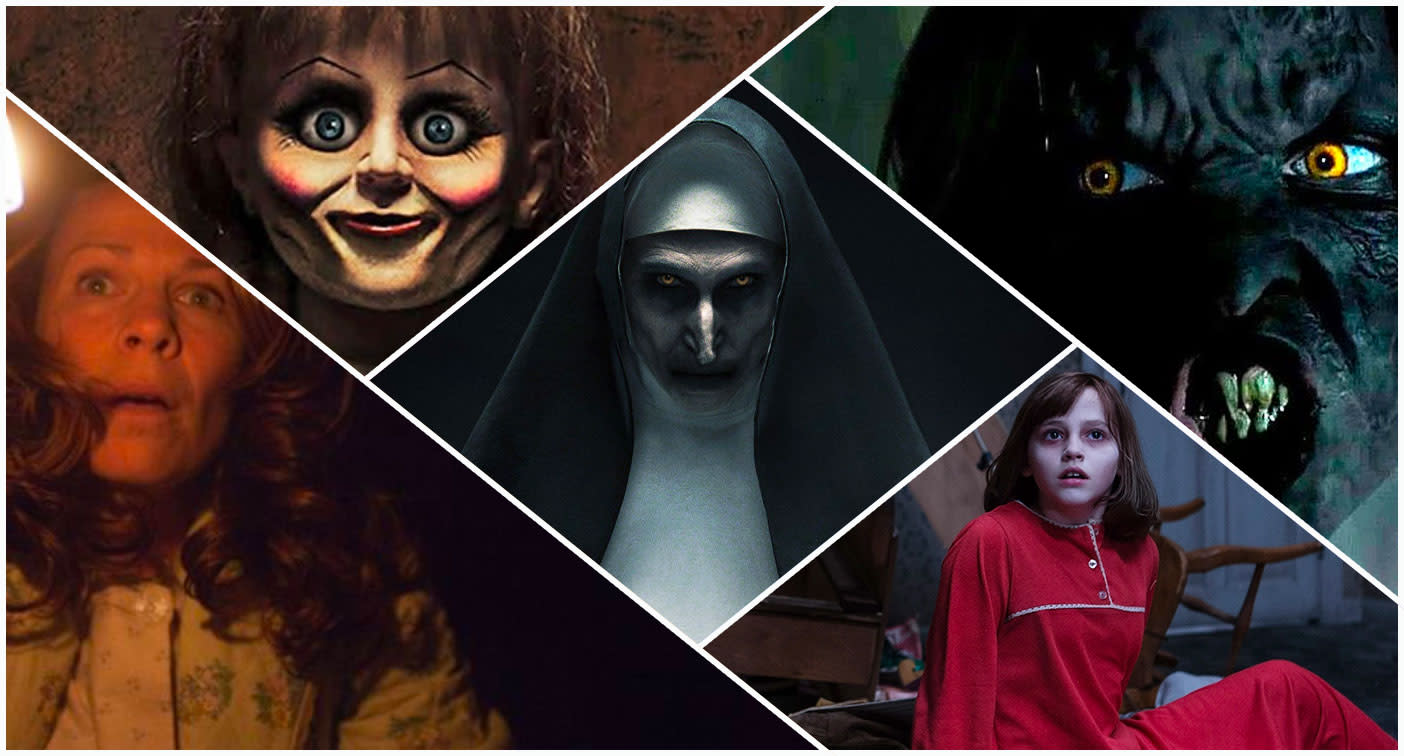 By far the most successful of all the crossover horror franchises in the modern age represents the shared universe of The Conjuring films. The main series centers on Ed and Lorraine Warren, the famous paranormal investigating couple who help those who find themselves being terrorized by malevolent entities. The Warrens' extensive collection of supernatural objects, based on their real-life museum in Connecticut, has served as the basis for a number of spin-off films that give the backstory on the couple's supernatural encounters. These include the Annabelle series, The Nun, The Curse of La Llorona, and The Crooked Man.

These low-budget, Conjuring-adjacent movies have helped Warner Bros. rake in an enormous profit based on the studio's massively lucrative brand. Considering the fact that The Conjuring movies remain some of the highest-grossing horror films of all time, there doesn't seem to be an end in sight for the franchise.

The conflict between the two baddest names in sci-fi horror started off as a Dark Horse comic book miniseries that ran from 1989 to 1990. Screenwriter Peter Briggs wrote an adaptation of the series in 1992, but the project suffered in development hell for years as more comics and video games expanded on the lore. There was even a Xenomorph skull on the trophy room wall in Predator 2. A cinematic Alien vs. Predator finally arrived in 2004, albeit with a completely different script than in 1992. The film explains that ancient humans worshipped the Predators and sacrificed their bodies to breed Xenomorphs for their gods to hunt. When a team of explorers accidentally awakens a Xenomorph hive in the ruins of a pyramid, a group of Predators intervenes.

Critics panned Alien vs. Predator for its silliness and its PG-13 rating, but the film produced enough money to warrant a sequel. Aliens vs. Predator: Requiem was even more of a critical bomb. This time, the movie was a financial bust, and plans for a third film were quickly cut short. I have no idea why. I want 2 societies of space monsters fighting, and if you can give me somewhat of a story; good, if not, who cares. I did not expect Shakespeare. I expected fighting, destruction, and pissed off monsters fighting with acid and blood flying. End of story.  I walked into the theater expecting fast food, apparently, critics expected 5-star dining.

With the reboot of The Predator from 2018, subtly features the spear made out of a Xenomorph tail from the first AVP, but there hasn't been talk of any continuation of this universe in recent years. Godzilla is the king of crossovers. He has been kicking gigantic monsters around since 1954. What makes Godzilla different from all other monsters, is he can fill any role. He has been the villain, the neutral party, and the rampaging hero to save us all. He has starred in so many movies by different studios; he holds records that will be virtually impossible to beat.

Pick a kaiju, and Godzilla has either beat or teamed up with them. The MonsterVerse not only offers us entertainment but also addresses social problems. Be it from nuclear energy to pollution. The kaiju has been a staple in the horror genre for a long time. Not to mention he has the best universe name. MonsterVerse. Who doesn't read that and not understand what it is? Is it about coked-out cheerleaders who babysit?  An accountant firm that does taxes? No, it's about rampaging monsters who tear up everything while trying to kill each other. Simple, straightforward, and to the point.

As we wait for the next movie in the lengthy history of the King of Monsters, we possess a huge library of movies to choose from.

Much like Alien vs. Predator, plans for a Freddy vs. Jason crossover movie began more than a decade before the actual film was released in theaters. The ending to Jason Goes to Hell(what a horrible movie) thrilled fans in 1993 when Freddy's hand suddenly popped out of the ground and pulled Jason's mask down below. However, audiences had to wait another ten years for the highly anticipated crossover movie. The long and arduous journey was because two different studios, New Line and Paramount, separately owned the rights to the Nightmare and Friday properties respectively. Plans for a crossover film began as early as 1987, but the two studios couldn't come to an agreement on the script.

When New Line finally acquired the rights to the Friday the 13th franchise, Freddy vs. Jason in its finalized form features a powerless Freddy appearing in the guise of Jason's mother in order to convince the machete-wielding menace to go on a killing spree. The reawakened fear allows Freddy to gain his power back, but he must fight with Jason to secure his victims back from him. Despite positive fan reception, there are no more plans for continuing the story, unless you enjoy comics. 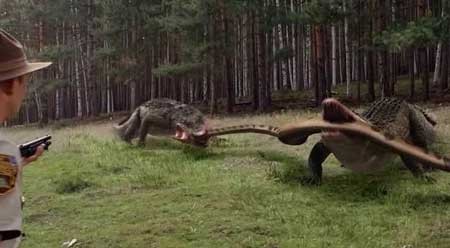 The SyFy channel is known for its seemingly countless movies pitting giant, mutated animals against each other. Who could forget Mega Shark vs. Giant Octopus or Sharktopus vs. Whalewolf? However, Lake Placid vs. Anaconda is unique in the SyFy lineup for bringing two fierce monsters from separate theatrical franchises together. Released in 2015, the film picks up immediately after the events of the previous movie Lake Placid: The Final Chapter and pits giant crocodiles against giant snakes.

Yea the CGI is kinda iffy, but how can you not like it. We need more giant crocodiles and snakes. I sat and enjoyed myself watching this like a little kid.  Instead of straightforward horror, we will get yet another big-budget ghost story or zombie rehashed a dozen times and expect to sit up and beg for more. Variety is the spice of horror movies.