The Golden State Killer has recently admitted to 13 murders and 13 kidnappings. He has been wanted since the mid-1970s.  After 45 years with the combined efforts of investigators in 6 California counties plus national agencies,  Joseph James DeAngelo was captured.

The Golden State Killer is a serial killer, serial rapist, and burglar who committed 62 rapes, 12 murders(that he admits to since there is no time limit to it), and 120 residential burglaries in California from 1974 to 1986. He is believed to be responsible for at least three crime sprees throughout California, each of which spawned a different nickname in the press before it became evident that they were committed by the same person. In the Sacramento area, he was known as the East Area Rapist and was linked by modus operandi to additional attacks in Contra Costa County, Stockton, and Modesto. He was later known for his southern California crimes as the Original Night Stalker. He is suspected to have begun as a burglar (the Visalia Ransacker) before moving to the Sacramento area, based on a similar modus operandi and circumstantial evidence. He taunted and threatened his victims and police in obscene phone calls and other communications. 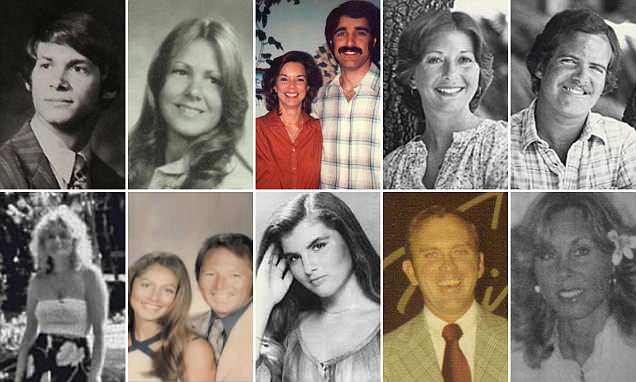 DNA evidence links the Golden State Killer to eight murders in Goleta, Ventura, Dana Point, and Irvine; two other murders in Goleta, lacking DNA evidence, are linked by modus operandi. Investigators suspect the same killer was involved in three other murders: two in Rancho Cordova, and one in Visalia. The offender also committed more than 50 known rapes in the California counties of Sacramento, Contra Costa, Stanislaus, San Joaquin, Alameda, Santa Clara, and Yolo, in addition to hundreds of incidents of burglaries, thefts, vandalism, peeping, stalking, and prowling.

It was long suspected that the training ground of the criminal who became the Golden State Killer was Visalia, California. Over a period of 20 months, the Ransacker is believed to have been responsible for one murder and around 120 burglaries. Most of the Ransacker's activities involved breaking into houses, vandalizing the owners' possessions, scattering women's underclothing, stealing coins and low-value or personal items, while often ignoring banknotes and other valuable items in plain sight.

In late April 2018, the Visalia chief of police stated that while there is no DNA linking DeAngelo to the Central Valley cases, his department has other evidence that will play a role in the investigation, and that he was confident that the Visalia Ransacker has been captured. Though the statutes of limitations for the burglaries have each expired, DeAngelo was formally charged on August 13, 2018, with the first-degree murder of Claude Snelling in 1975. The Golden State Killer was believed to have moved to the Sacramento area, progressing from burglary to rape in mid-1976. The crimes initially centered on the unincorporated areas of Carmichael, Citrus Heights, and Rancho Cordova, east of Sacramento. His initial modus operandi was to stalk middle-class neighborhoods at night in search of women who were alone in one-story homes, usually near a school, creek, trail or other open space that would provide a quick escape. He was seen a number of times, but always successfully fled; on one occasion, he shot and seriously wounded a young pursuer.

Most victims had seen (or heard) a prowler on their property before the attacks, and many had experienced break-ins. Police believed that the offender would conduct extensive reconnaissance in a targeted neighborhood; looking into windows and prowling in yards before selecting a home to attack. It was believed that he sometimes entered the homes of future victims to unlock windows, unload guns, and plant ligatures for later use. He frequently telephoned future victims, sometimes for months in advance, to learn their daily routines.

Although he originally targeted women alone in their homes or with children, the offender eventually preferred attacking couples. His usual method was to break in through a window or sliding glass door and awaken the sleeping occupants with a flashlight, threatening them with a handgun. Victims were then bound with ligatures (often shoelaces) which he found or brought with him, blindfolded and gagged with towels which he had ripped into strips. The female victim was usually forced to tie up her male companion before she was bound. The bindings were often so tight that the victims' hands were numb for hours after being untied. He separated the couple, often stacking dishes on the male's back and threatening to kill everyone in the house if he heard them rattle. He moved the woman to the living room and often raped her repeatedly, sometimes for several hours. 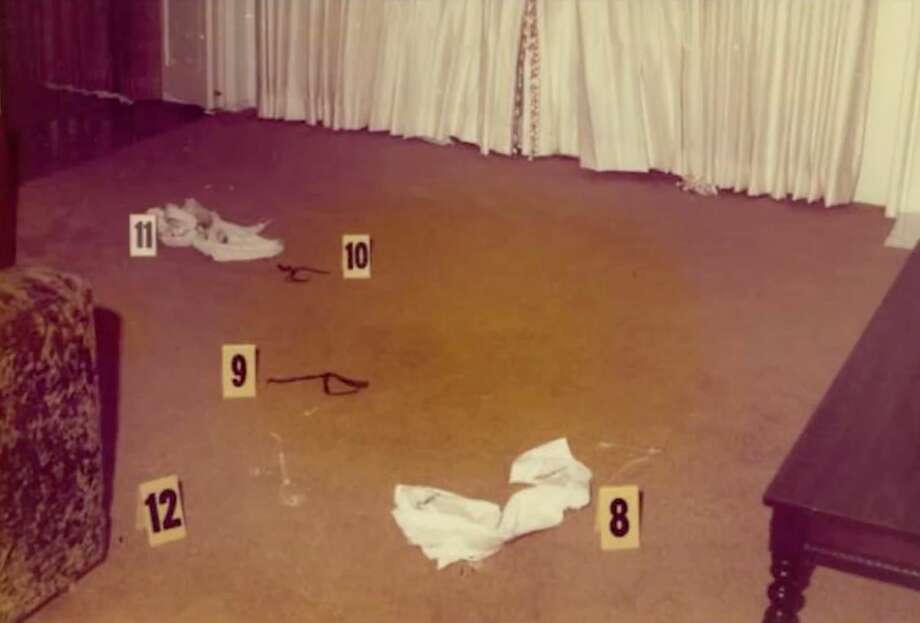 The offender sometimes spent hours in the home ransacking closets and drawers, eating food in the kitchen, drinking beer, raping the female again or making additional threats. Victims sometimes thought he had left the house before he would come back into the room. The offender typically stole items, often personal objects and items of little value but occasionally cash and firearms. He then crept away, leaving victims uncertain if he had left. The offender was believed to escape on foot through a series of yards and then use a bicycle to go home or to a car, making extensive use of parks, schoolyards, creek beds, and other open spaces that kept him off the street.

The rapist operated in Sacramento County from the first attacks in June 1976 until May 1977. After a three-month gap, he struck in nearby San Joaquin County in September before returning to Sacramento for all but one of the next ten attacks. The rapist attacked five times during the summer of 1978 in Stanislaus and Yolo counties before disappearing again for three months. Attacks then moved primarily to Contra Costa County in October and lasted until July 1979. 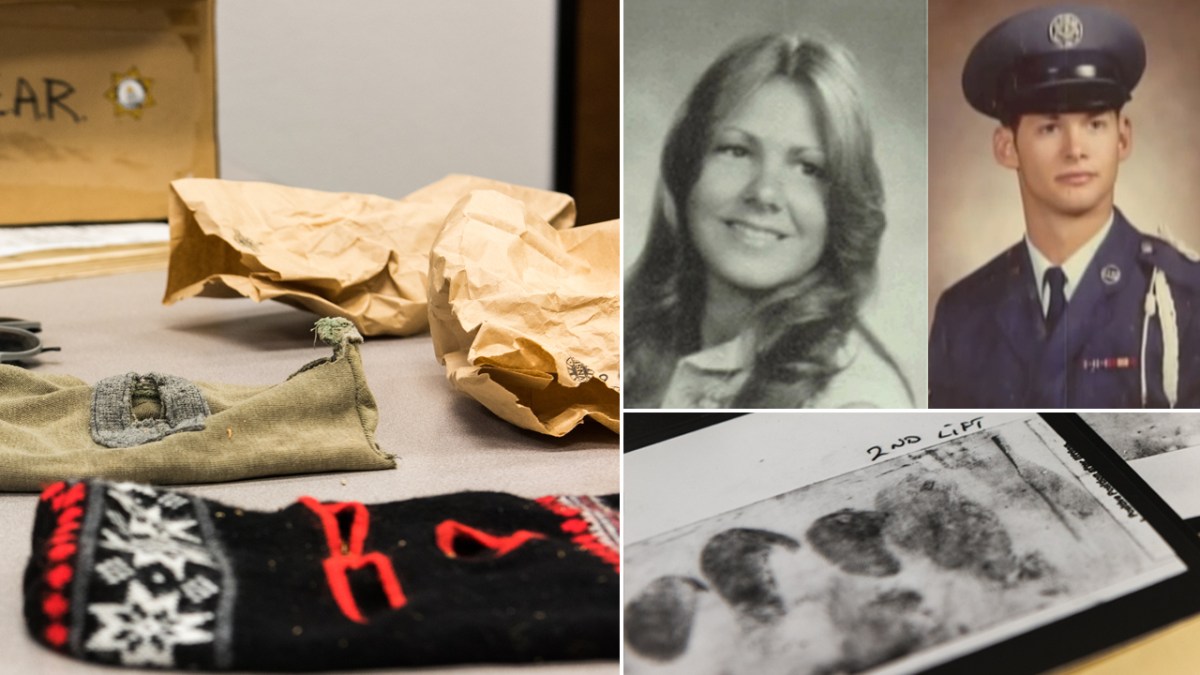 Shortly after the rape committed on July 5, 1979, the East Area Rapist moved to southern California and first struck in Santa Barbara County in October. The attacks lasted until 1981 (with a 1986 attack), and the rapist began to kill his victims. Only the couple in the first attack survived, alerting neighbors and forcing the intruder to flee; the other victims were murdered by gunshot or bludgeoning. Since the East Area Rapist was not linked to these crimes for decades, he was known as the Night Stalker in the area before being renamed the Original Night Stalker after serial killer Richard Ramirez received the former nickname. 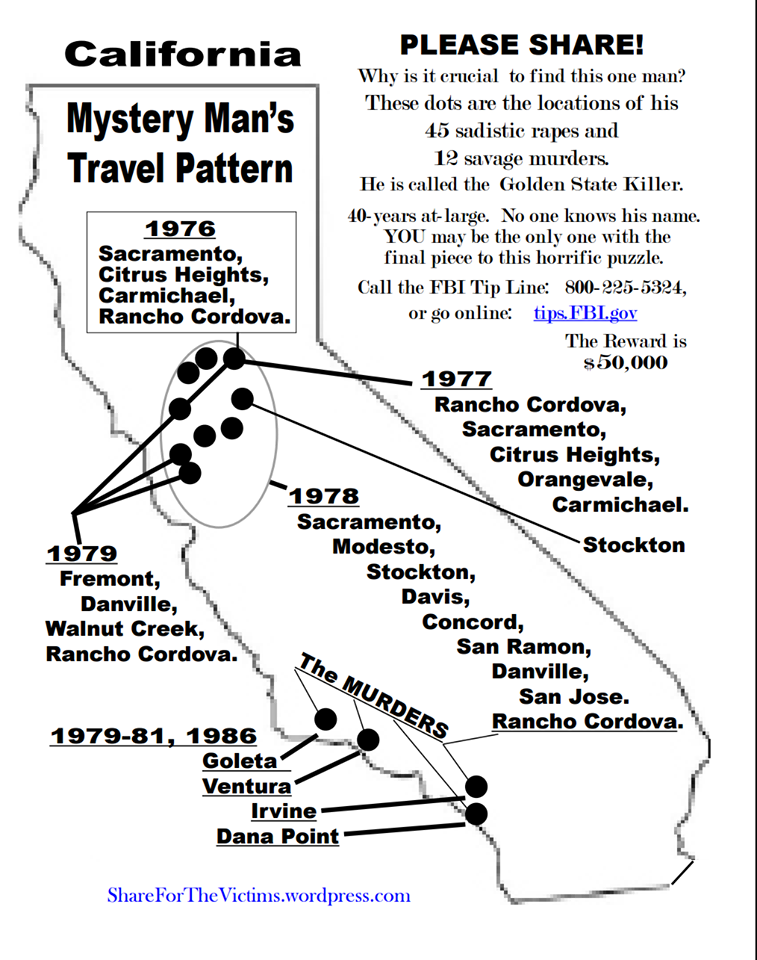 Before officially connecting the Original Night Stalker to the East Area Rapist in 2001, some law-enforcement officials (particularly from the Sacramento County Sheriff's Department) sought to link the Goleta cases as well. The links were primarily due to similarities in MO. One of the already-linked Original Night Stalker double murders occurred in Ventura, 40 miles (64 km) southeast of Goleta, and the remaining murders were committed in Orange County, an additional 90 miles (140 km) southeast. In 2001, several rapes in Contra Costa County believed to have been committed by the East Area Rapist were linked by DNA to the Smith, Harrington, Whithuhn, and Cruz murders. A decade later, DNA evidence indicated that the Domingo–Sanchez murders were committed by the Golden State Killer. 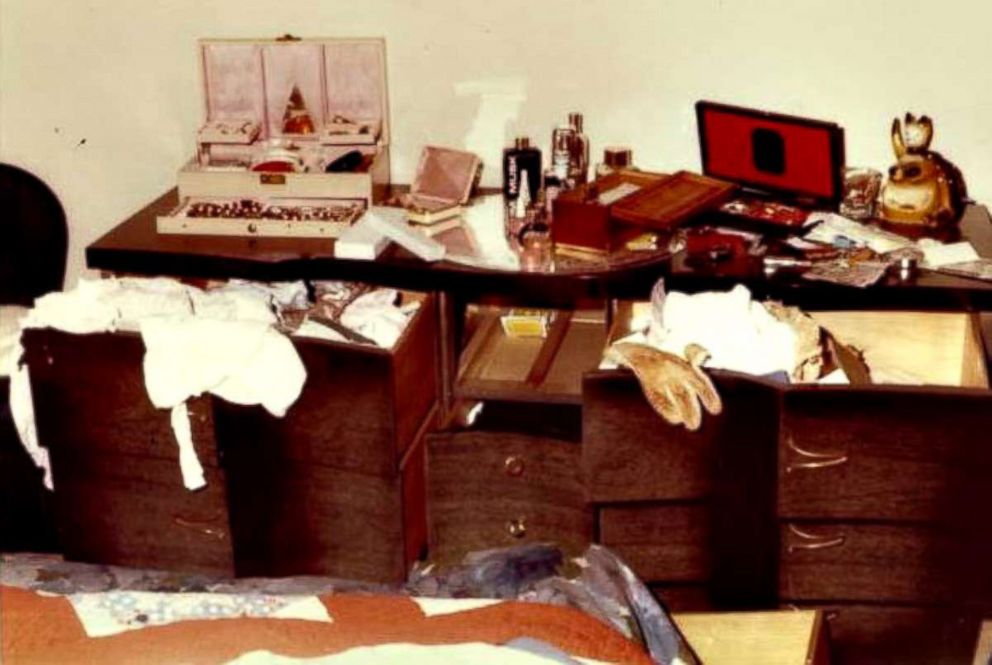 On June 15, 2016, the FBI released further information related to the crimes, including new composite sketches and crime details; a $50,000 reward was also announced. The initiative included a national database to support law enforcement investigating the crimes and handle tips and information. Eventually "through the use of genetic genealogy searching on GEDmatch, investigators identified distant relatives of DeAngelo—including family members directly related to his great-great-great-great-grandfather dating back to the 1800s. Based on this information, investigators built about 25 different family trees. The tree that eventually linked to DeAngelo alone contained approximately 1,000 people. Over the course of a few months, investigators used other clues like age, sex, and place of residence to rule out suspects populating these trees, eliminating suspects one by one until only DeAngelo remained." 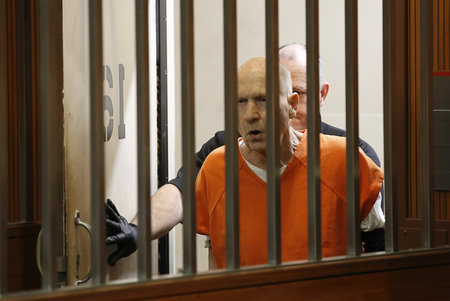 Identification of DeAngelo had begun four months earlier when officials, led by detective Paul Holes and F.B.I. lawyer Steve Kramer uploaded the killer's DNA profile from a Ventura County rape kit to the personal genomics website GEDmatch. The website identified 10 to 20 people who had the same great-great-great-grandparents as the Golden State Killer; a team of five investigators working with genealogist Barbara Rae-Venter used this list to construct a large family tree. From this tree, they established two suspects; one was ruled out by a relative's DNA test, leaving DeAngelo the main suspect. 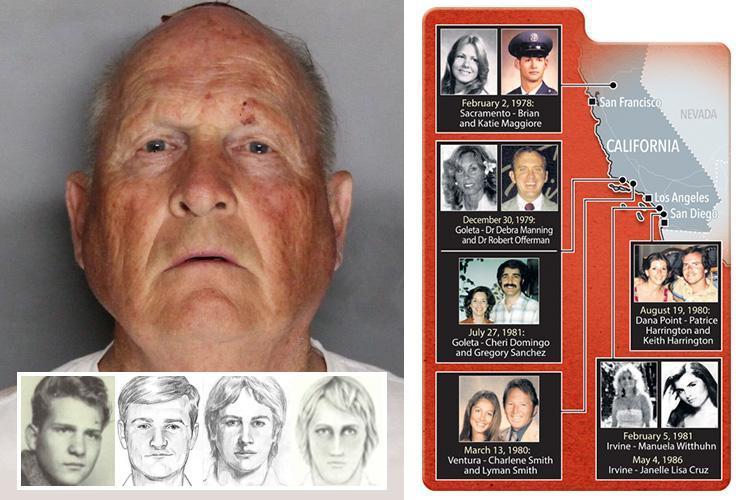 On April 18, a DNA sample was surreptitiously collected from the door handle of DeAngelo's car, and later another sample was collected from a tissue found in DeAngelo's curbside garbage can. Both were matched to samples associated with Golden State Killer crimes. After DeAngelo's arrest, some commentators raised concerns about the ethics of the secondary use of personally identifiable information. DeAngelo cannot be charged with rapes or burglaries because the statute of limitations expired for those offenses, but he has been charged with 13 counts of murder and 13 counts of kidnapping. He faces either life without parole or death if convicted. DeAngelo was arraigned in Sacramento on August 23, 2018. In November 2018, prosecutors from six involved counties collectively estimated that the case could cost taxpayers $20 million and last 10 years. On 10, 2019, court proceedings, prosecutors announced that they would seek the death penalty, and the judge ruled that cameras may be allowed inside the courtroom during the trial. On March 4, 2020, DeAngelo offered to plead guilty if the death penalty was taken off the table, which was not accepted at the time. On June 15, 2020, it was reported that DeAngelo would plead guilty to 13 murder charges and kidnapping charges related to as many rapes on June 29 of that month, in a deal to avoid the death penalty. 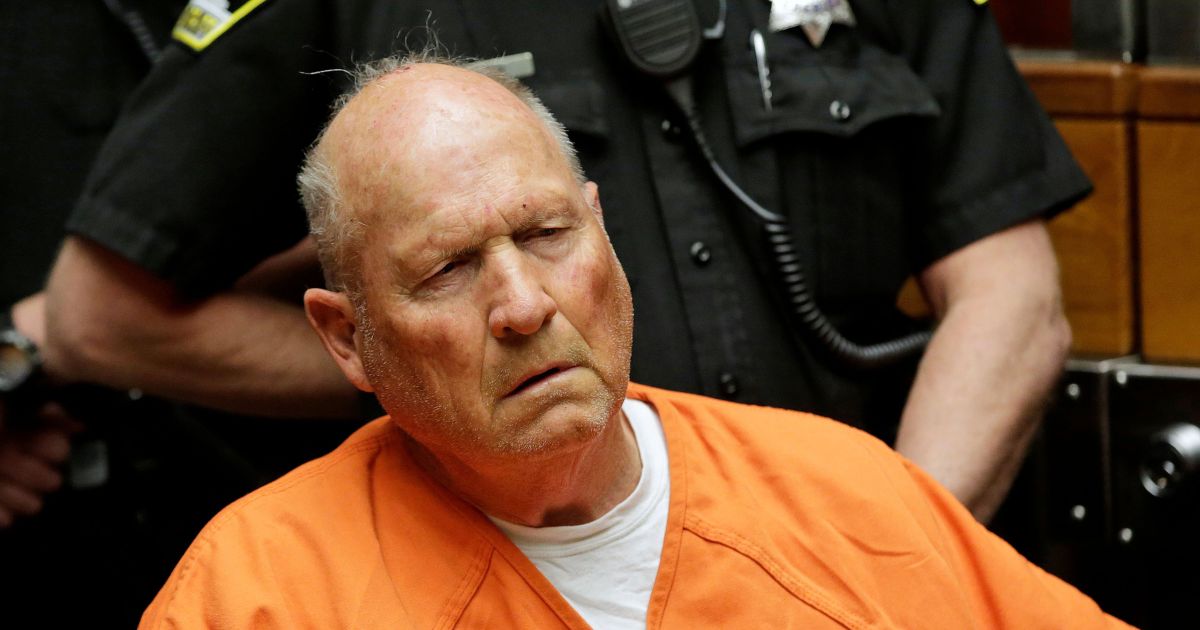 He committed at least 62 rapes, 12 murders, and 120 residential burglaries throughout California, and then disappeared without a trace. first strucking on June 18, 1976, when, wearing a mask and gloves, he broke into a woman's home in Rancho Cordova and robbed her of money and jewelry. He will spend the remainder of his life in prison.