Everything We Know About SCREAM 5

The next installment of Scream has finally started filming. We have been hearing rumors and snip-its of information from multiple sources since December 2018. Now all the bits and pieces are in place for part 5(maybe). To say the least, Scream has been a horror fans horror franchise that plays up the rules of horror movies. And because it doesn't take itself so seriously is what keeps it in a favorable light. Let's go over a little history first. When Dimension Films announced its intention to release the original Scream in December 1996, critics declared it a failure even before it opened. After all, who releases a horror movie during Christmas? Dimension knew there were many teens seeking something, anything to serve as an antidote to mistletoe and carols. What they got was a simple question. “Do you like scary movies?” Audiences ended up sounding a resounding “Yes!” Ever since it stalled out with 2011’s Scream 4, there have been rumors of the franchise’s return. Horror icon Craven directed all four of the original Scream films, but sadly the legendary creator passed away in 2015. "Scream" is being handed to Matt Bettinelli-Olpin and Tyler Gillett, the co-directors of 2019’s “Ready or Not.” That movie was inventive, brutal, and satirically sharp. Bettinelli-Olpin and Gillett seem like a solid pick to bring new life into this franchise. Let's not forget about writer Kevin Williamson is executive producer and writer Chad Villella. We have been dubbing it Scream 5 since it is the fifth in the franchise but the official title is confusingly named "Scream". It’s still unclear whether or not this new film is a brand-new Scream, or Scream 5. So to quote Scream 4 It's a "requel" a reboot and a sequel. This follows the recent trend of naming the movie after the first film in the series, which is entirely confusing to everyone. And is universally hated across the board. SO STOP IT studios.  I have a feeling this one will make pt. 2-4 void and be a direct sequel of the original like Halloween did.

The last film was released in 2011, the Scream legacy actually continued on in the form of an anthology TV series produced by Dimension Television and MTV. Taking place in the fictional town of Lakewood (not the films’ fictional town of Woodsboro), the series featured all-new characters and aired on MTV and VH1 from 2015 until 2019. There was also a web series called "Scream: If I Die" that was released in 2016 and featured video confessionals from some of the characters from the series. If the new movie does continue the franchise directly, it’s unclear (but doubtful) that elements from the TV series would come into play.

Even the press release doesn’t provide us much information. “A new installment of the 'Scream' horror franchise will follow a woman returning to her home town to try to find out who has been committing a series of vicious crimes.” Not much to go on. But here is what we know for sure. Neve Campbell stars with David Arquette, Courteney Cox, and Marley Shelton who are all reprising their roles as Sidney Prescott, Dewey Riley, Gale Weathers, and Deputy Judy Hicks. Newcomers to the film include Jack Quaid, Jenna Ortega, Dylan Minnette, Kyle Gallner, Mason Gooding, Jasmin Savoy Brown, Sonia Ammar, and Mikey Madison. 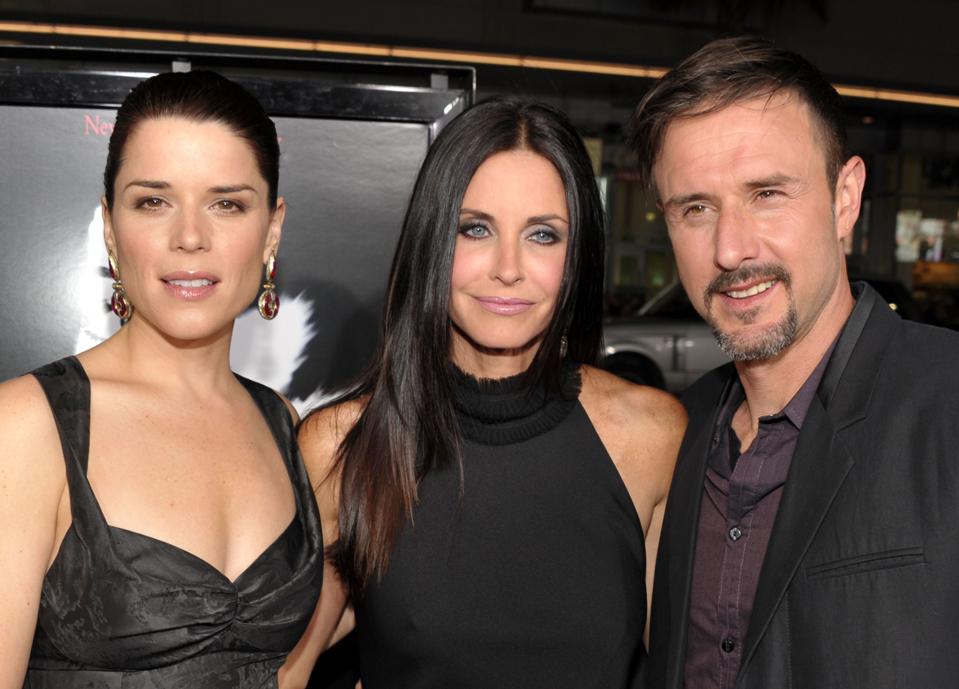 By the time the original Scream came out, horror films of the late 80s and early 90s were mired in a loop of increasingly ridiculous cheeseball sequels featuring predictably unstoppable killers and blood-soaked Z-list actors. Scream breathed new life into horror by being self-referential and self-aware. It cleverly mocked horror movie clichés while also indulging in them. Whether it’s a remake or a reboot, the new Scream enters a world in which horror occupies a considerably different place than it did in 1996. The rules have changed, and it’ll be interesting to see if Scream can adapt or if it will once again try and revisit the slasher.

It is scheduled for release on January 14, 2022. But most likely be released in December 2021, for the 25th anniversary of the original.